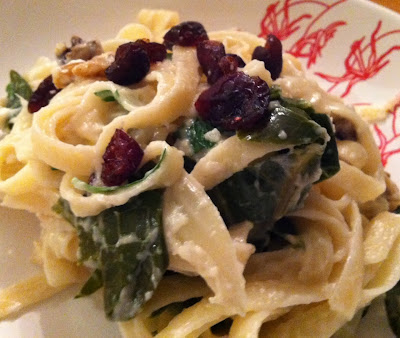 If I put the main ingredients in the post title, you might have quickly passed this one by. But that would be a shame, because this is a tasty version of fettuccine, well-suited for fall. Now that you're reading this far, I can encourage you to stick with it and give it try!

OK, you're still with me? Leftover turnip puree served as the inspiration for this dish. Now, it's not too often I find myself inspired by turnips. But I was tried out Barbara Lynch's recipe in  Stir: Mixing It Up In The Italian Tradition for Pork Chop with Caramelized Apples, Celery and Spiced Walnuts, which she recommended serving over turnip puree. It was a tasty dish, but generated a lot of extra turnip puree. Noting its thick creaminess, I figured that it would make a good basis for a pasta sauce. But it would need some salt and sweetness to offset the slight bitterness of the turnip. Bacon, which I like to cook with greens, and cranberries seemed to be in order...

I made this dish a few weeks ago, and am just now getting to finish up the post on the day after Thanksgiving. Which leads me to suggest that this would a nice way to use leftover turnips (see my note on how to do that in the instructions). I'd also imagine adding a few cups of bite sized pieces of turkey meat to the dish would be tasty, and a nice change of pace from turkey sandwiches!

Enough preliminaries, on to the details of the dish!

For the turnip puree (basically half of Chef Barbara's recipe is right for this dish):
1 cup heavy cream (I used coconut cream because of a dairy allergy).
1 tbsp unsalted butter
1 lb turnips, peeled and cut into 1 inch cubes

Make the turnip cream: Heat the cream and butter in a pan over medium heat. When the butter is melted, add the turnip and a pinch of salt. Reduce to simmer, partially covered, for 30 to 45 minutes, until the turnip is tender when pierced with a fork. Puree the combination in a food processor until you get a nice, even consistency. Return to the pan and keep warm on very low heat as you make the rest of the dish. Note: If you have cooked, mashed turnip already on hand from Thanksgiving or some other occasion, you could heat that turnip gradually with the cream, stirring to gradually combine.

Make the rest of the dish: Heat a large pot on medium high and spray with cooking oil (I use olive oil). Add the bacon and cook until it is nice and crispy. Remove the bacon from the pan and cool it on paper towel set on a plate to absorb the excess grease. Pour most of the extra grease out of the pan, but leave a bit for that bacon flavor! When the bacon is cool, crumble it into bite sized pieces and set it aside to add to the dish later.

Start boiling the water for pasta after you've added the greens. Cook the pasta according to package instructions. Drain the pasta when it's done, then toss the pasta with the turnip puree. Once the turnip has coated the noodles well, toss in the the greens. Be sure to use up all the good liquid from cooking the greens to capture all the nutrients and flavor. After mixing the greens and pasta, stir in the cheese followed by the bacon. Plate the pasta, and top each dish with a bit of the walnuts and cranberries. Serve at the table with a bit of extra cheese, and enjoy! 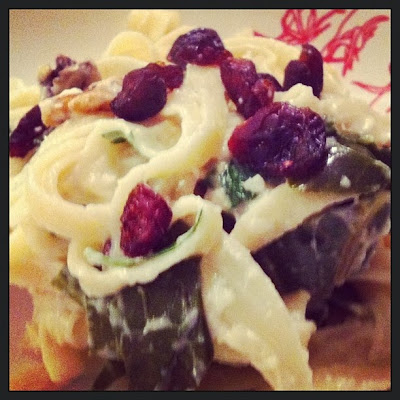 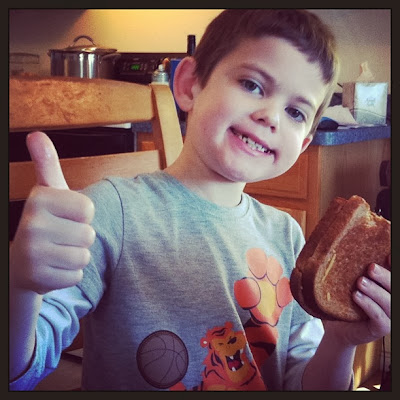 I tend to focus here on some of the fancier or at least creative dishes I cook. But for seven years now, we've been figuring out how to get our son with multiple food allergies safe, healthy and tasty food. Food allergies can be a bit overwhelming to those unfamiliar or recently diagnosed with them. So I will make a point to do more sharing about some of the recipes, tips and techniques that we've learned over the years. Our son B is allergic to eggs, all nuts, dairy and sesame seeds. See disclaimer at bottom of post.

A grilled cheese is far from fancy, but it is a comfort food that many of us have enjoyed. However, we've found it to be a challenging item to replicate with the products we've tried previously. Well, sure, I've stuck a some tasteless soy cheese between bread and tried to make a grilled cheese, but until this latest attempt, was never tasty enough to lure B away from his daily soynut butter sandwich. So let me describe each ingredient that combined to work for a tasty grilled "cheese" for our lad, followed by instructions just in case you haven't made one successfully before!

The "cheese":  When I mentioned B is allergic to dairy, Ellie in the Whole Foods Woburn cheese department suggested the Daiya cheddar style shreds specifically for making grilled cheese. This product is also soy free, with tapioca and/or arrowroot flours, some vegetable oils and pea protein listed among its main ingredients. The product is vegan-friendly. Unlike some other dairy-free cheeses we've tried, this melts quite nicely. Given the ingredients, this doesn't have the protein or calcium of a dairy cheese. Our son eats meat so we're not worried about getting enough protein.

The bread: Those that haven't contended with food allergies would probably be surprised at how hard it can be to find bread that doesn't contain milk and/or eggs. Oh, and of course, other breads that don't have those items may contain nuts, or have potential traces of them. Lately we have been choosing Whole Food Organic 100% Whole Wheat Bread. It's free of milk, eggs, and nuts, with wheat being the only listed allergen. It does contain the stipulation that it is "produced in a facility where various types of nuts...are used." We've been comfortable choosing Whole Foods products with this label, as long as it doesn't indicate potential for traces of nuts or that it was made using shared equipment that also uses the allergens we avoid.

The "butter": A generous amount on butter on the bread is key to getting a grilled cheese to cook up with that nice golden brown color. We have long been fans of the Earth Balance Natural Buttery Spread. In fact, unlike some other dairy substitutes that I eschew, given that I can eat dairy, I like this about the same as cow's milk butter for many things. In fact, for spreading on something like grilled cheese, I'd rate in better because it's a bit softer and easier to spread. This is also vegan-friendly, made with a natural oil blend.

1) Start heating a no-stick frying pan on medium. Get your two slices of bread ready, and spread the Earth Balance spread on one side of each of the pieces of bread. 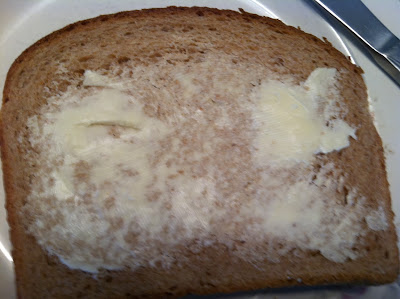 2) Turn the bread so the buttery side is down. Sprinkle the Daiya cheddar slices on one of the pieces of bread. My son likes a modest amount, as shown below, just enough to make the pieces of bread stick together. I got a thumbs down when I piled on more than this! 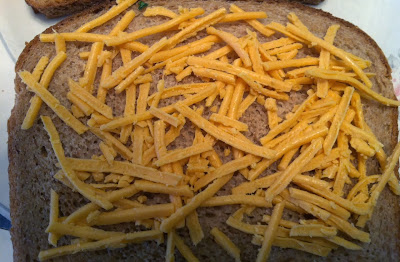 3) Put the other slice of bread on top of the cheese to close up the sandwich. I spray a bit of canola oil on the pan before putting the sandwich on to cook. Hold the sandwich carefully as you transfer it to the pan, to keep the shreds from slipping out. Let the sandwich cook on one side until it starts to brown, about 5 minutes. Press down with a spatula on top of the sandwich once or twice during the cooking. Slide the spatula underneath the bottom of the sandwich to turn, using your other hand on top of the bread to keep it together. Carefully turn it over to cook the other side, takes about 3 to 4 more minutes. Look at the side to see the cheese is melting to know it's about done. If the top hasn't browned to your liking, turn it over to cook for another minute or two. When the bread is nicely browned on both sides and the cheese is melted, you are ready to put the grilled cheese on a plate and enjoy! 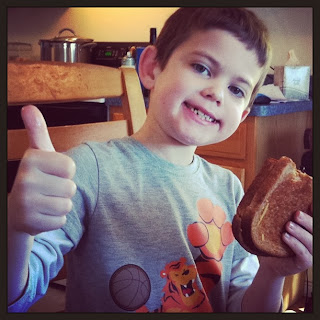 Disclaimer: Food allergies can be life threatening and must be taken very seriously. In posts such as this where I discuss things we've used and made to work around our son's allergies, the intent is to share our experiences, including products and techniques that have worked for us. Hopefully you might come up with some new ideas from this blog. Every case is unique, however, so you should be certain to read labels carefully, consult your own doctor, and always have an Epi-pen handy, if prescribed. Keep in mind we are just one family doing our best to manage food allergies; I'm not a medical professional and don't purport to offer medical advice.
Newer Posts Older Posts Home
Subscribe to: Posts (Atom)