Linguine with Turkey and Mushrooms 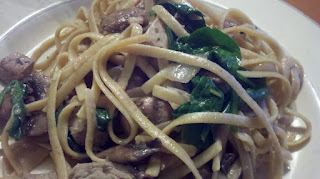 You have probably come across Turkey Tetrazzini at some point in your culinary travels. If, like me, your experience of it is mostly from your college dining hall days, you'd probably join me in not being eager to replicate it. But I did take away from that dish the notion that turkey and mushrooms can go well together. So when I had a lot of leftover turkey breast on hand, I set about making this pasta dish--much lighter than the creamy casserole dish I was served back at Winthrop House! 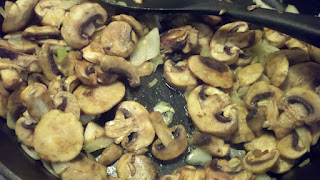 Begin boiling the water for the linguine. Heat 1 tbsp olive oil in a large skillet over medium heat, then add the onion and saute. When the onion has softened, after 5 minutes or so, stir in the garlic and cook for another couple minutes. Add 1 tbsp of butter, and when melted, stir in the mushrooms, and add the rosemary, thyme, and salt & pepper to taste. Cook until the mushrooms begin to soften, about 5 minutes. Stir in the wine, and cook it down for about 5 minutes. Start cooking the pasta according to package directions around the time you add the wine.

After the wine has cooked down, finish the mushroom preparation by adding the other tbsp of butter. Then stir in the leftover turkey and heat until the meat is warmed up. Keep on low heat until the pasta is done.

Drain the pasta when it is done, then toss with the turkey and mushroom mixture, then stir in the cheese.

Wine Pairing: Turkey and mushrooms sure said Pinot Noir to me. Went with the Pennywise Pinot Noir and wasn't disappointed with this good value. 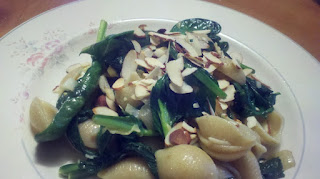 If you've read this blog before, you know Friday isn't my day for ambitious cooking projects. Do you know the feeling? End of a long workweek, the fridge is getting low but there are still a few odd assorted items that ought to be used up. This calls for a Frugal Friday special, which in my house often entails some form of pasta. Frugal can be good in many ways--you feel virtuous about using things up, saving money and avoiding waste. But you have to make it taste good, or you'll be reverting to take-out at week's end. Don't do it, try a version of this or other Frugal Friday dishes!

This wasn't a stellar food planning week for me. I'd gotten a bunch of arugula on sale that had already gone bad, and had just barely put a dent in one of those 16 oz pre-packaged baby spinach containers. I also had bits and pieces of several cheeses--this dish isn't as decadent as the four cheeses in the title might suggest. I just used a little of each to use things up and add some complexity to the flavor. Needless to say, you can adapt this to cheese you have on hand. Here's the recipe:

Start boiling water for the pasta. Heat a large skillet on medium heat. Add a tbsp of the olive oil, then the chopped onion. Stir occasionally, and let them cook up until they start to turn brown and caramelize, at least 10 minutes. Add the garlic, cook for another minute. This is a good time to start cooking the pasta according to package directions.

After adding the garlic, start stirring in the spinach, a couple of handfuls at a time. Add a bit of salt and another tbsp of the olive oil when you add the first batch of spinach. Let one batch start to wilt before stirring in some more. Reserve a handful or two of the spinach, and add that as you are about to drain the pasta. This helps ensure you have some nice substantial spinach leaves.

Drain the pasta when cooked, then toss it with a tbsp of olive oil and the spinach mixture. Stir in the cheese, and serve topped with a sprinkling of almonds and a bit of extra cheese, if desired.

Wine: The 2010 R Collection Lot No. 7 Field Blend from Raymond worked out well with another recent pasta dish, so I tried it again with this one. It worked OK, but I'd say this really calls more for a white. An Italian Pinot Grigio or, if you are feeling creative, Verdicchio, might be a nice choice.