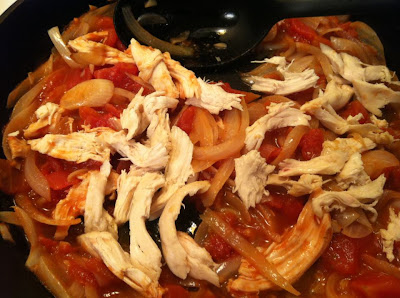 This dish is so simple I almost wasn't going to post it. But perhaps you, too, find yourself with a bit of leftover cooked chicken on hand and are looking for a little inspiration. The combination of onions, tomato and chicken, with some feta and olives tossed in, came out very nicely. You might want to duplicate this or make up you own version.

I started by chopping one sweet onion and sauteeing it in some olive oil until it started to caramelize, about 10 minutes. Added two cloves garlic, minced, and sauteed for another minute. Then in goes a 14.5 oz. can of diced tomatoes and a tsp of dried oregano, simmered on medium heat. I started cooking the small pasta shells at the same time I started cooking the tomatoes. After the tomatoes simmered for about 10 minutes, I added the leftover chicken breast along with a handful of sliced kalamata olives. I had about 8 ozs or so, cut into bite sized pieces. I just wanted the chicken to get heated up but not really cook any more.

Once the pasta was cooked and drained, it gets tossed with the tomato/chicken sauce, along with a 1/2 cup or so of feta cheese. Then you've got a quick, tasty meal ready to enjoy! 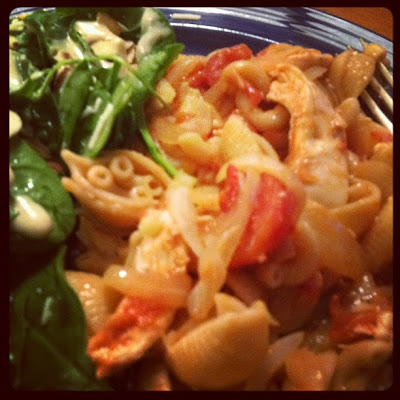 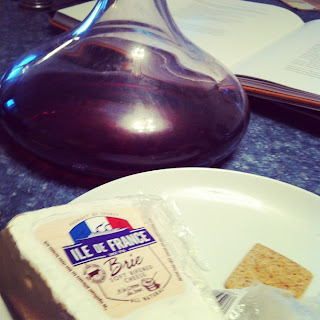 I'm always up for some wine and food pairing fun! So when the folks at Ile de France Cheese ask me on Twitter if I'd like to try to come up with a wine pairing for one of their cheeses, I readily accepted. There were a couple bottles of French wine I had on hand that I thought I might try, which I had in mind when selected the cheese. We've always been brie fans here, so I opted for that over the goat cheese and blue cheese that were available at the grocery store.

Chardonnay was the first idea that came to mind for pairing with brie, and that was one of the more frequently mentioned suggestions in my quick online research. I was more in the mood for red wine, however, and lighter wines with acidity like Pinot Noir were often recommended. Enough with the web research, I was ready to open up the cheese and some wine and try for myself!

First, I opened a Beaujolais, which I'd also come across on the web as a suggested pairing. It has a similar body and acidity like Pinot, making if food friendly. Should work great with the brie, right? Well, this wine was very austere, and that acidity seemed to clash with the creaminess of the brie. I tried decanting the Beaujolais. It opened up a bit, I like the wine better, with some blackberry fruit showing, but alas, not a winner for this brie. 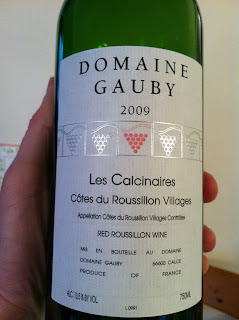 Then I found a winning pairing for the Ile de France Brie. The 2009 Domaine Gauby Les Calcinaires Côtes du Roussillon Villages had nice plummy fruit and a touch of spice. But what really made it work in my estimation was the silky smooth mouthfeel with a long finish. That silky mouthfeel matched very nicely the creaminess of the cheese, so going between bites of cheese and sips of wine was a continuous, pleasurable experience.

This Côtes du Roussillon is a blend of Syrah (50%), Mourvedre, Grenache Noir, and Carignan. The bottle goes for an average price of about $25. I suspect you'd do well pairing this Brie with other reds from Roussillon with a similar blend, and you might also enjoy it with a Côtes du Rhone with Syrah and Grenache.

This experiment is a good reminder that with wine and food pairings, you've got to let your own taste decide. On paper (or the web), the Beaujolais should have worked according to the expert commentary. But I branched out, tried something that I thought might work, and found a very nice pairing! Be willing to try different combinations, and pay attention to how the two work together for YOU, and you'll be well on your way to discovering great pairings for yourself.
Newer Posts Older Posts Home
Subscribe to: Posts (Atom)