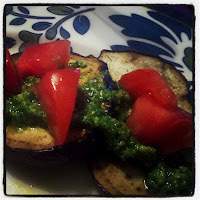 It was another busy week with only a few nights to focus on preparing these veggies. Jodi requested something with pesto for her birthday dinner on Wednesday. Alas, no basil yet from the CSA, so I'd have to buy that. But I thought we could start off the meal with a cold cucumber soup to cool us on the 90+ degree day. I don't know about you, but I get a bit daunted about what to do with four cucumbers. So I was glad to find this recipe for Zucchini Cucumber Soup, which produced a very fresh tasting soup that made a nice starter. I served the pesto with linguine; topped with diced tomatoes--via the first ones picked from my Dad's garden this summer.
I made a simple salad using the mesclun mix and one of my remaining cucumbers to serve with leftover pesto later in the week. Our 6 year old has been working his way through the carrots for snacks. To use up the remaining veggies, I repeated last week's combo of grilled beets, turnip and carrots; along with the sauteed squash and greens.
Now, on to that new recipe for the week... 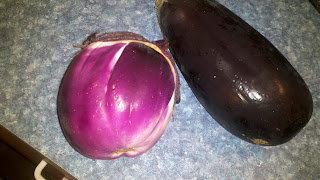 2 eggplants, sliced about 1/2 inch thick (I had one "regular" eggplant and one identified by a Facebook friend as a Rosa Bianca heirloom eggplant)
pesto--get my recipe here This is a good way to use some pest you already on hand, as you'll just need a couple of tablespoons to make this one.
diced tomatoes
After you slice the eggplant, spread it out and sprinkle it with salt. Let it sit that way for about 30 minutes, then wipe the salt off. This improves the flavor and consistency. Preheat the grill to medium as the end time for your salting approaches. 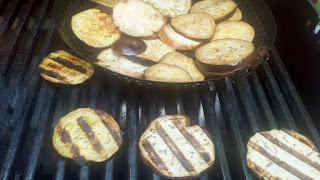 Spray both sides of the eggplant with olive oil, then place on the grill. Turn it over once, grill for about 8 to 10 minutes until it is nicely browned and soft. I put some directly on the grill, some in the grill pan, and think I liked the ones on directly better. Remove from grill and spread out to cool a tad. Next spread about 1 tsp of pesto on each eggplant circle, then top with the diced tomatoes. I'd suggest just fixing up the amount you think you will eat. When I did this for two, we had extra eggplant onhand which I reserved for a future use. I served this as a side dish with a bit of sausage and a pigeon peas, rice and kale dish I'd made earlier in the week.Yum! 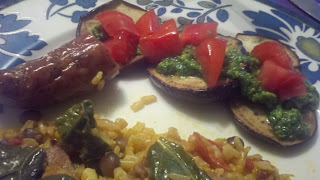