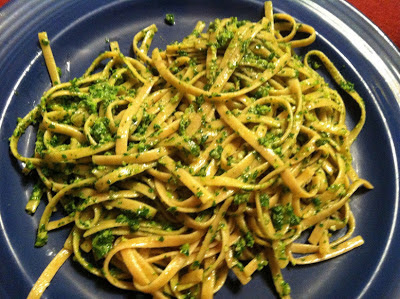 Earlier this summer, I was inundated with kale from the consumer support agriculture (CSA). Though I like combining kale with sausage for kale soup and things like this pasta dish, that was starting to get a bit old. As a big fan of traditional and creative pesto, I was excited to come across The Girl in the Little Red Kitchen's recipe for kale pesto. I made enough tweaks to her recipe based on what I had in hand that I figured I'd share my own recipe here, while crediting her for the inspiration and basic concept. I noticed this was still stuck in my draft blog posts and wanted to share. Though we haven't had kale in awhile from the CSA, I'm sure it will be back...and of course, it's available in abundance year-round at grocery stores. Here's my version, which we really enjoyed: 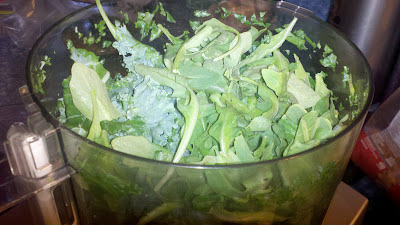 Begin cooking some pasta before you start making the pesto. Add the kale, arugula and garlic to a food processor, coarsely chopping to create enough room for the other ingredients. Add the other ingredients and puree until it comes to a nice smooth consistency. Toss with the hot pasta after it's cooked and drained, then serve. As with other pestos, I gradually stir the pesto into the pasta until fairly well coated, but not too heavy. I then let people serve extra pesto according to taste. Pass extra cheese at the table.