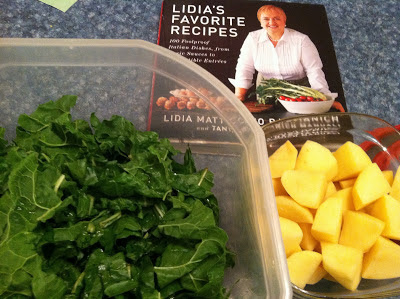 I've tried and enjoyed a recipe or two from Lidia Bastianich before, so I jumped on the opportunity to test out her new cookbook,Lidia's Favorite Recipes: 100 Foolproof Italian Dishes, from Basic Sauces to Irresistible Entrees

. I had some potatoes on hand via the CSA and Swiss chard was on sale. So I thought this Swiss Chard Potatoes would be a good starting point for trying the book. And if it came out well, I'd have a new healthy side dish in my repertoire! 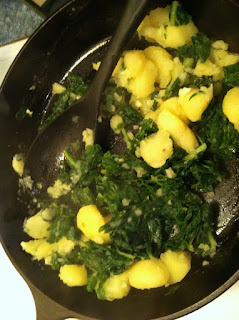 Bring a large pot of salted water to a boil. Add the potatoes, cook for 20 minutes or so, until tender. Now here Lydia says to add the Swiss chard stems, which which she has you thinly slice and add after the potatoes have been on for 20 minutes. (*I missed this step and put the stems into my stock bag. I suspect it would add some additional texture to the dish). Cook the stems for 10 minutes, then add the chard leaves for another 5 minutes. Drain in colander.

Heat 2 tbsps of the olive oil in a large skillet over medium heat. Add the garlic, cook about 1 minutes until it begins to brown. Add the chard and potatoes, season lightly with salt and pepper. Cook, stirring and gradually mashing the potatoes, until the liquid is absorbed and the potatoes are coarsely chopped. Add the remaining 2 tbsps of olive oil, season to taste with salt and pepper, stir and serve.

This dish was a nice change of pace to serve with our roast beef! Similar consistency to regular mashed potatoes, but loaded with plenty of healthy chard too. I will keep this on in mind for when chard rolls in via the CSA. Stay tuned for more recipe's from Lidia's latest book! 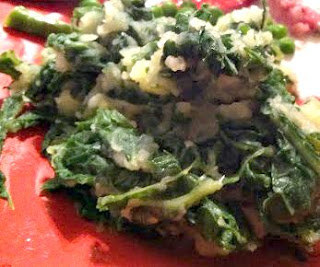 Full disclosure: I received a review copy of the book. My adventures with the recipes and opinions of my book are fully my own!