Pasta with Greens, Gruyere and Bacon 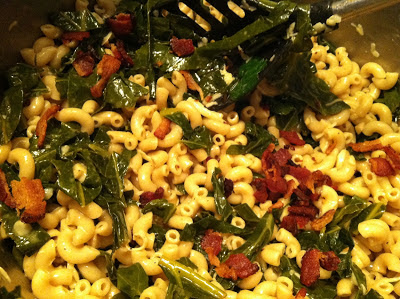 Gruyère is one of my favorite cheeses. The rich nuttiness makes it a tasty snack on its own, and it also melts nicely to impart a lot of flavor when cooking. So when I was asked if I wanted to sample  cups Emmi Kaltbach™ Cave-aged Le Gruyère®  I quickly agreed. Though I was tempted to just crack it open when it arrived and start nibbling, I waited a week or so to plot what I wanted to make with it. When last weekend's weather didn't look good for grilling, it seemed like a good time for a pasta dish featuring the Gruyere cheese. Collard greens were on sale, so I grabbed them to combine with the cheese and bacon, and I was well on my way to a tasty new dish! You can easily substitute other greens here. This method for fixing the greens along with the bacon is also my go-to way of fixing them as a side dish. 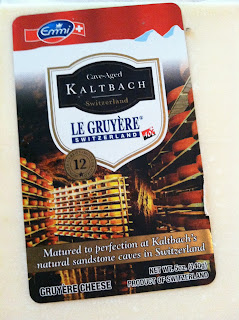 Heat a large pot on medium high and spray with cooking oil (I use olive oil). Add the bacon and cook until it is nice and crispy. Remove the bacon from the pan and cool it on paper towel set on a plate to absorb the excess grease. Pour most of the extra grease out of the pan, but leave a bit for that bacon flavor! When the bacon is cool, crumble it into bite sized pieces and set it aside to add to the dish later. 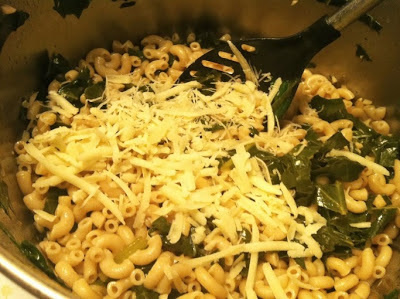 Start boiling the water for pasta after you've added the greens. Cook the pasta according to package instructions. Drain the pasta when it's done, then toss the pasta with the greens. Be sure to use up all the good liquid from cooking the greens to capture all the nutrients and flavor. After mixing the greens and pasta, stir in the cheese followed by the bacon. Serve at the table with a bit of extra grated Gruyère , and enjoy! This can be a main course, though we did have a bit of salmon on the side, and served with a nice Greek white wine. 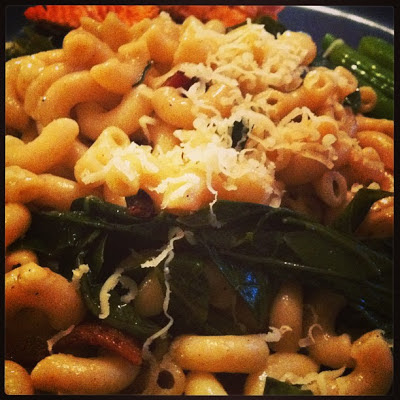 Full disclosure: The Gruyère was provided to me as a free sample. The recipe is my own creation!