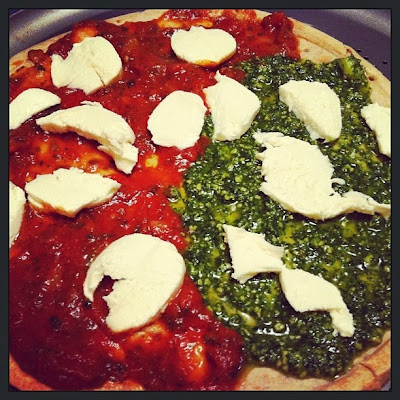 I typically wouldn't bother posting anything so simple. Or that I put together so haphazardly. But it is almost Christmas, and I might not be the only one that still has substantial shopping left to do and a need to make food for a few gatherings. So maybe something simple but festive looking isn't such a bad idea? Maybe even worth a blog post? I vote yes!

Now, this Christmas pizza wasn't born out of a desire to create something aesthetically pleasing for the holiday. Rather, it was prompted by my quest to limit waste of food. It bugs me to no end that something like 40% of food in America gets wasted. I'm on a constant quest to use as much of the food in our home as possible, to lower that figure and our budget. Now, when the food in question is pesto, I'm definitely on a mission!

Here's what you need for this:

Pesto--about 1 cup or a little less will do. I had some leftover, but if you want to whip up a fresh batch, here's my always popular recipe.
Mozzarella cheese--I like the fresh mozzarella, and had a ball of it left from making pizza last week.
Tomato pasta sauce--I rarely use jarred tomato sauce, but do tend to keep it on hand for the occasional quick supper. Of course if you have a cup or so of your own that's awesome.
Pizza crust--Again, if you want to make your own, kudos to you...but your veering away from the simple theme. I go with the Whole Foods 365 Organic Whole Wheat, which we almost always have around because my 8 year old loves it with his dairy free cheese.
Olive oil--Just a tbsp or two will do.

The process: Preheat oven to 400. Place 1 pizza crust on a pizza baking tray. Slice your cheese up thin. Spread the olive oil over the crust to lightly coat. With a tablespoon, spread the pesto over roughly one half of the pizza, then with a clean spoon spread the tomato sauce over the other half. I find a fairly thin coating of the sauce is good so as not to overwhelm. Place the mozzarella slices around the pizza evenly. Put in oven, bake for about 10 minutes until cheese melts and begins to bubble and brown. Slice and enjoy! We had this for support last night but small slices would work to serve as a party appetizer.

The wine: We had some Chianti with this which is an obvious choice. Try a Barbera or Dolcetto for some variety!