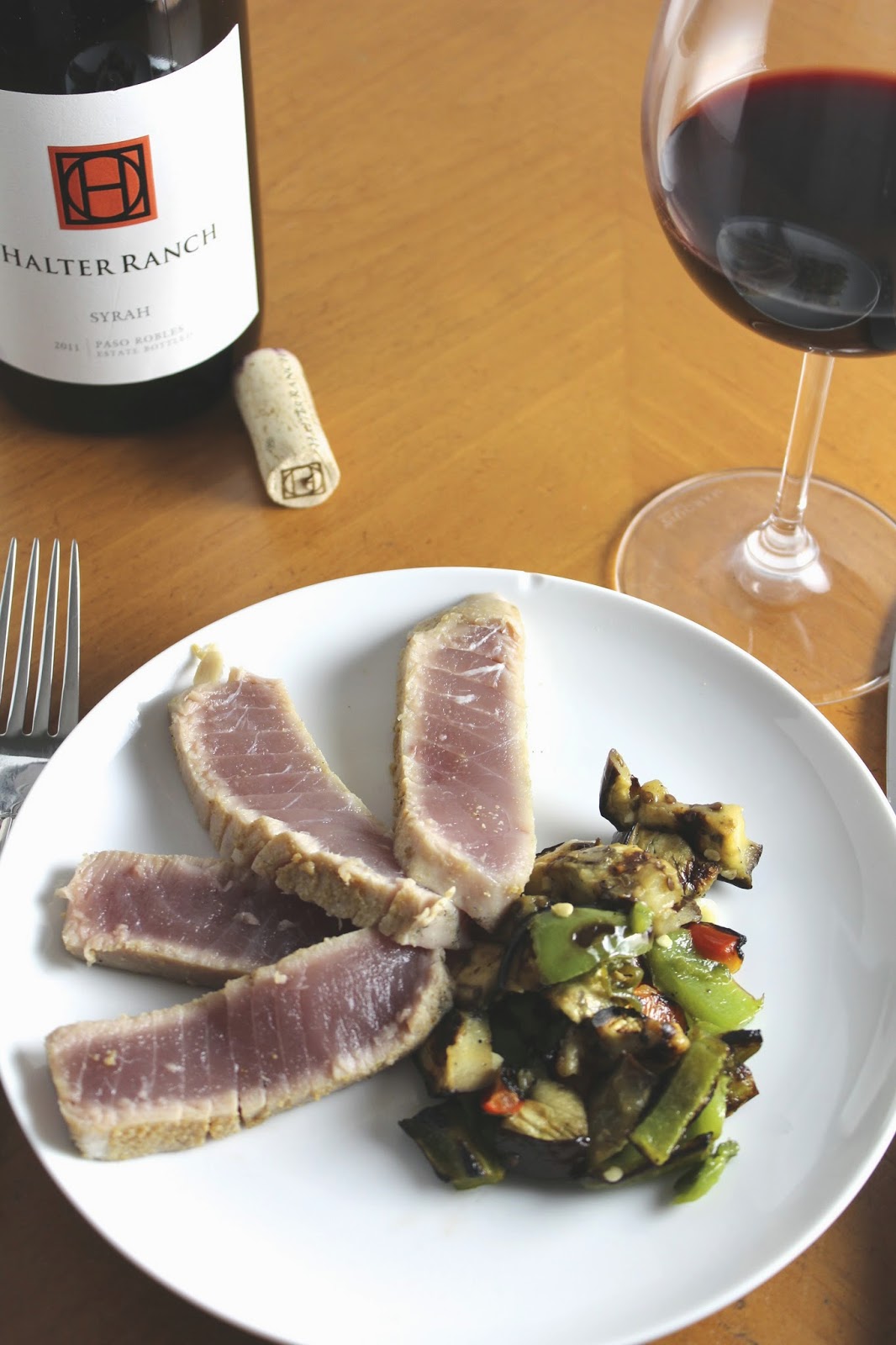 Sure, I like my classical regional food and wine pairings. You'll certainly find plenty of Italian dishes in our house paired with a wine selected from the same region the cuisine hails from.  But I also like the challenge of starting with a wine, and then trying to create a dish that is in someway inspired by the wine region. That's the way I decided to roll for Wine Pairing Weekend #4.

I've come to enjoy quite a few wines from California's Paso Robles region. Through blogger friends like Matt of the Hoot n' Annie Blog, I've gotten some sense of the regions vitality from afar. But what would a Paso Pairing entail? I didn't know, but I thought that would be fun to figure out for this #winePW event.

I asked Matt what Paso food would entail. He mentioned fresh seafood with seasonal produce from local farms, perhaps with a Mexican flair. That gave me enough to get my wheels turning about a Paso pairing I might create.

I'd enjoyed the Halter Ranch Syrah from Paso before, and thought that might be a good wine to work with for this event. I served it with steak previously and thought it would be interesting to see if it could work with a tuna steak. I had an eggplant to use from our fall farmshare, so that seemed in the spirit of the local produce. I decided to grill the eggplant and toss it with a mixture of peppers, including some hot ones to give the dish some Mexican spice accents. 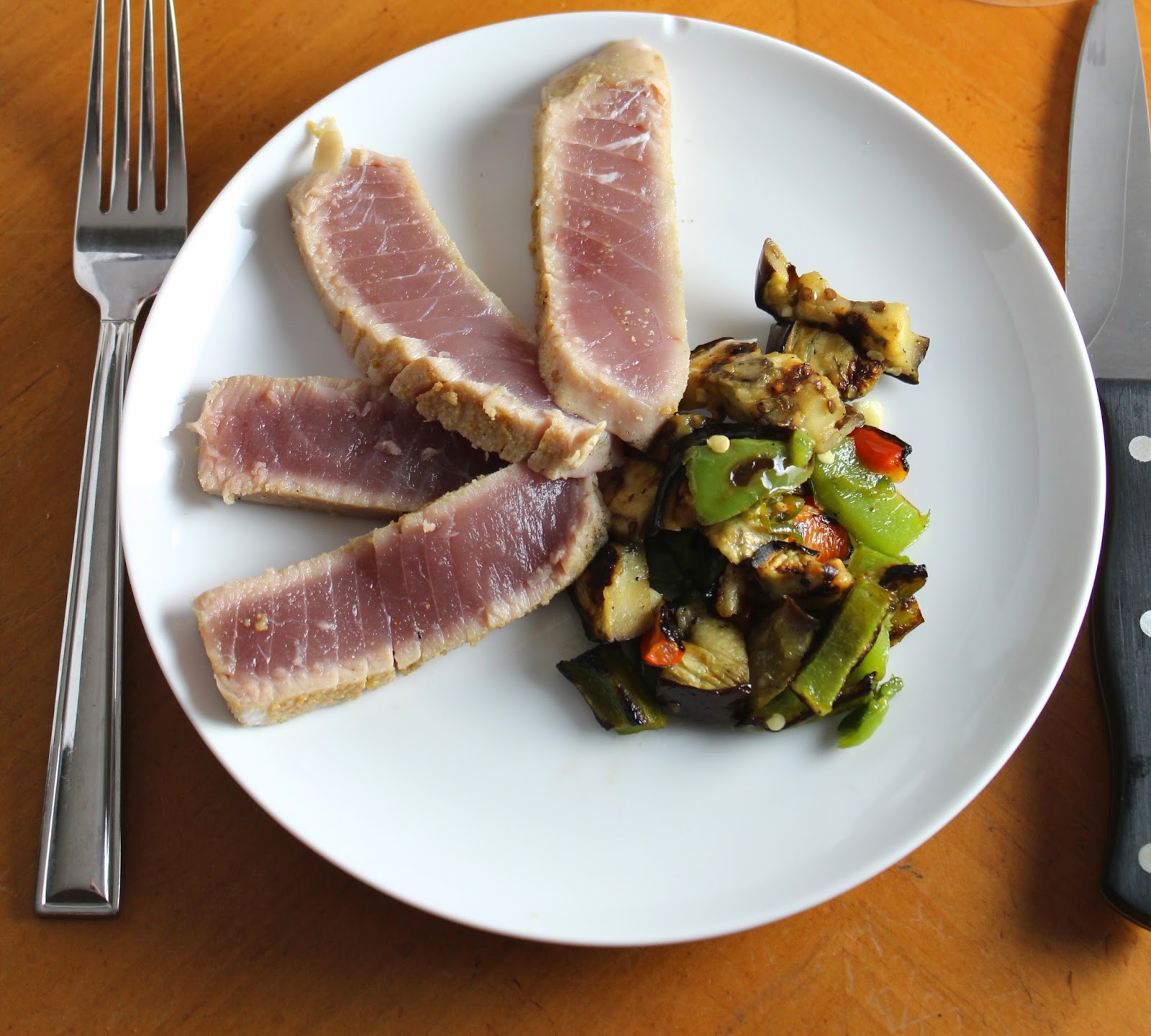 The result? Not sure if this is properly considered Paso Robles cuisine, but it was definitely rooted in what I learned about the food in the area. And it definitely worked with the wine! Read on for the Grilled Tuna, Eggplant and Peppers recipe and wine pairing details. 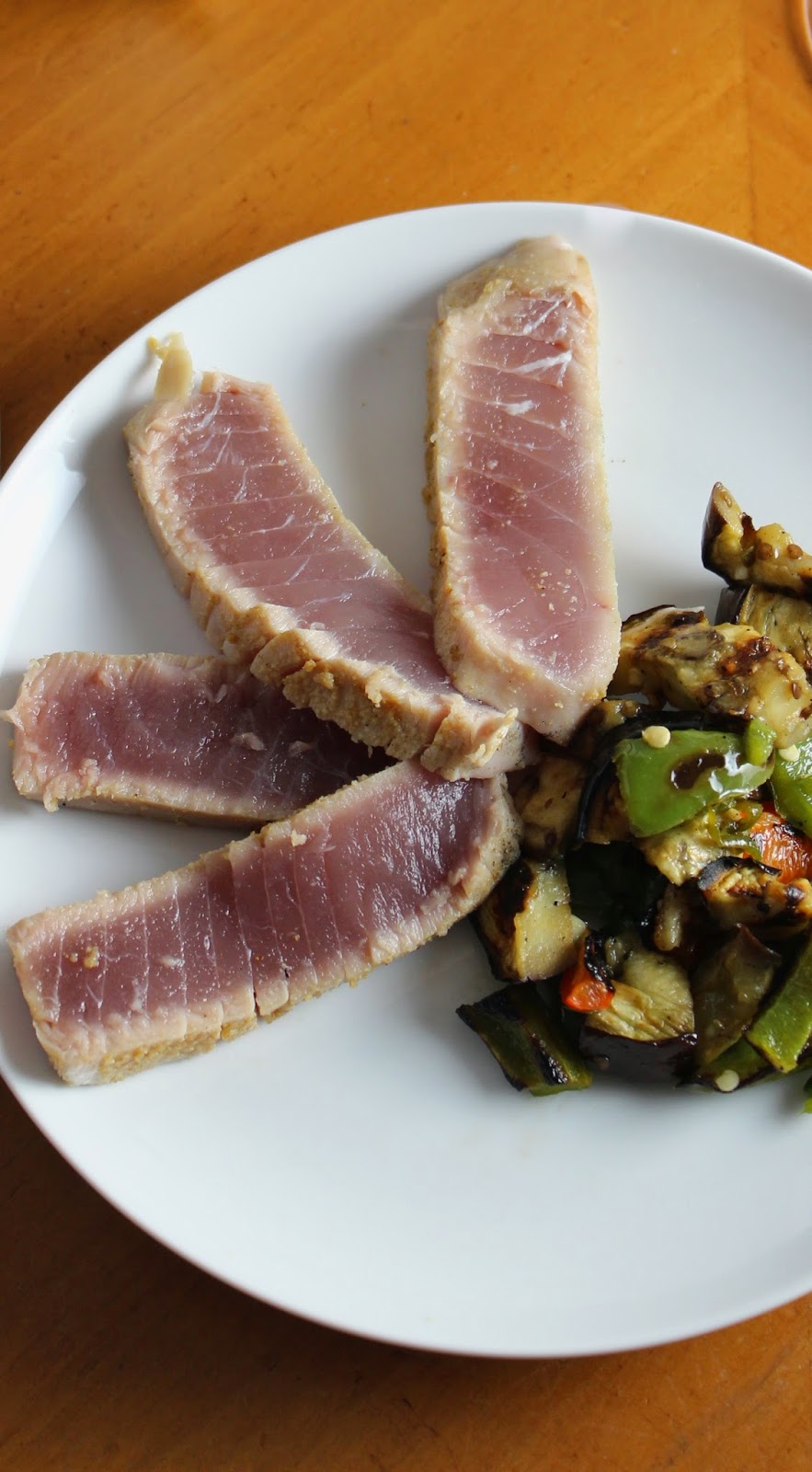 The tuna cooks very fast so you want to prepare the eggplant and pepper mixture first. Start by slicing a medium eggplant 1/2 inch thick. Spread the eggplant slices on a plate in a single layer. Salt the eggplant sliced generously, and let the eggplant sit and aborb the salt for at least 30 minutes. I've found this salting process to be a key factor in getting me to add eggplant to the list of veggies I enjoy. 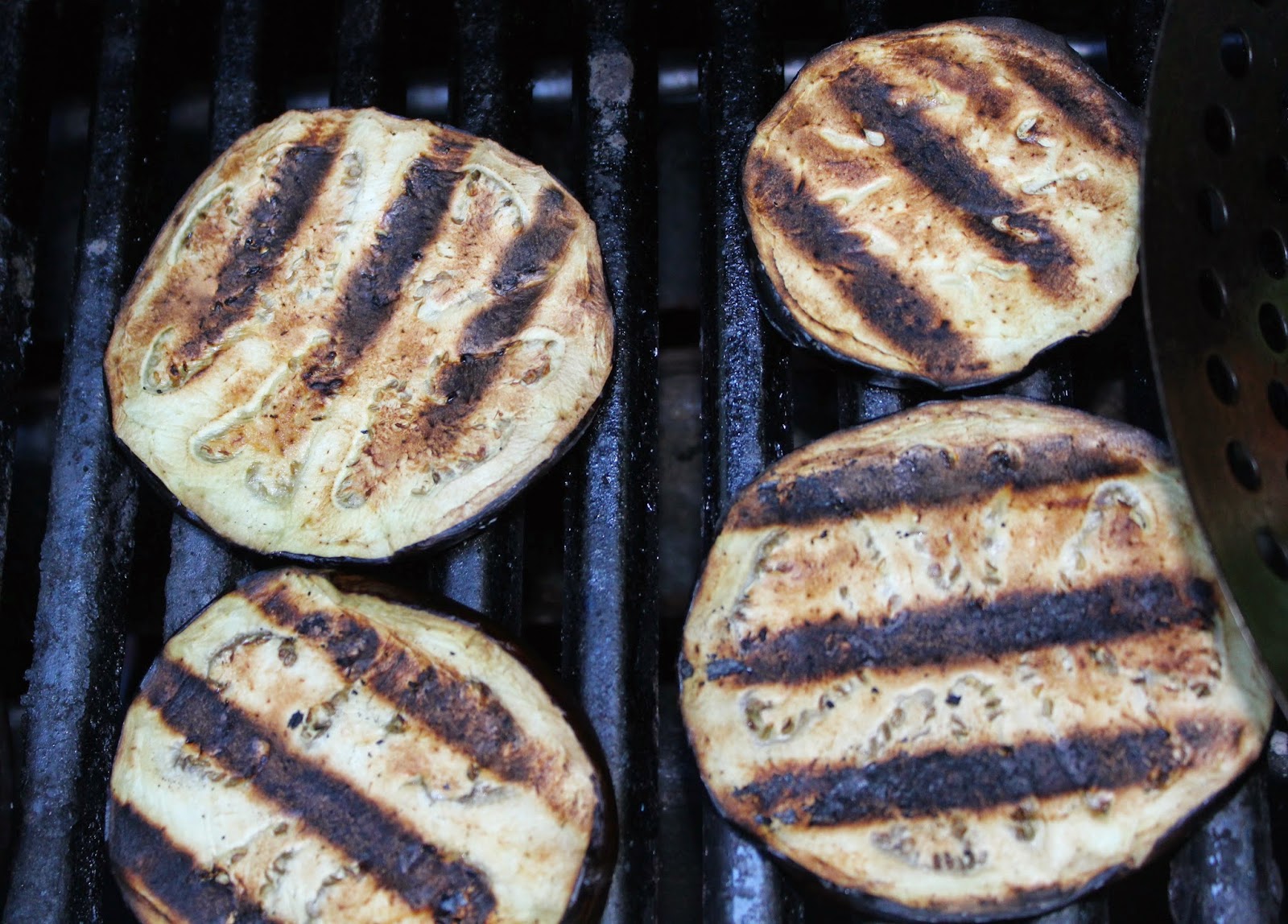 When the eggplant has cooled, chop it into bite sized pieces and add to the bowl with the bell peppers. 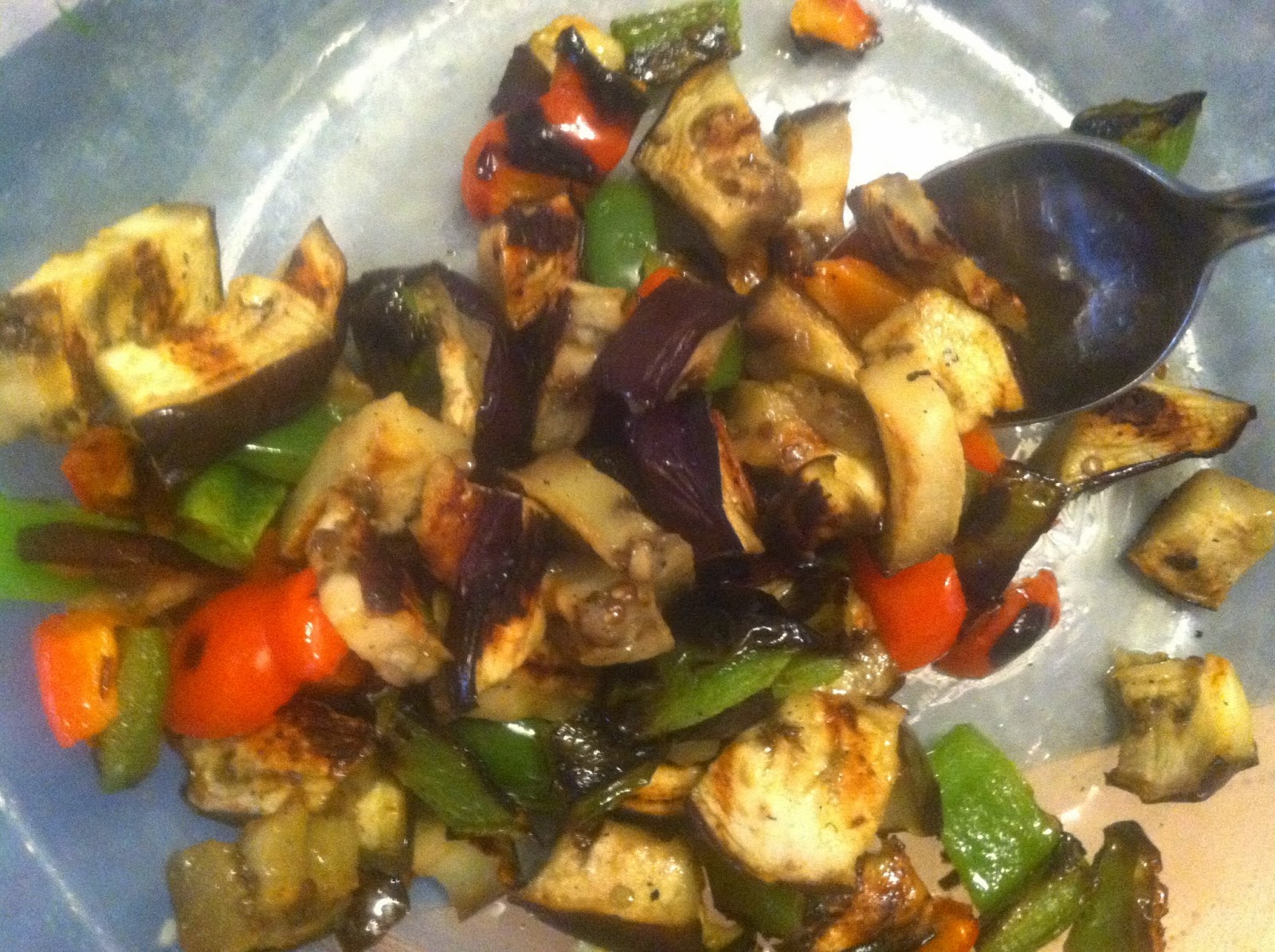 Add the tablespoon olive oil and garlic to the pepper/eggplant mixture, and stir to combine. Set aside as you prepare the tuna.

Combine the cumin, garlic powder and salt in a bowl. Gently rub the spice mixture onto the tuna, and set aside for a few minutes.

Grill the tuna for about 90 seconds on one side, then turn for another 90 seconds on the others side. This gives you a rare tuna steak, with the outside seared in the middle just warmed a bit. When done to your liking, remove the tuna to a platter.

Slice the tuna crosswise into the slices. Serve by fanning 4 to 6 slices of tuna out on a plate around a generous dollop of the pepper and eggplant mixture. 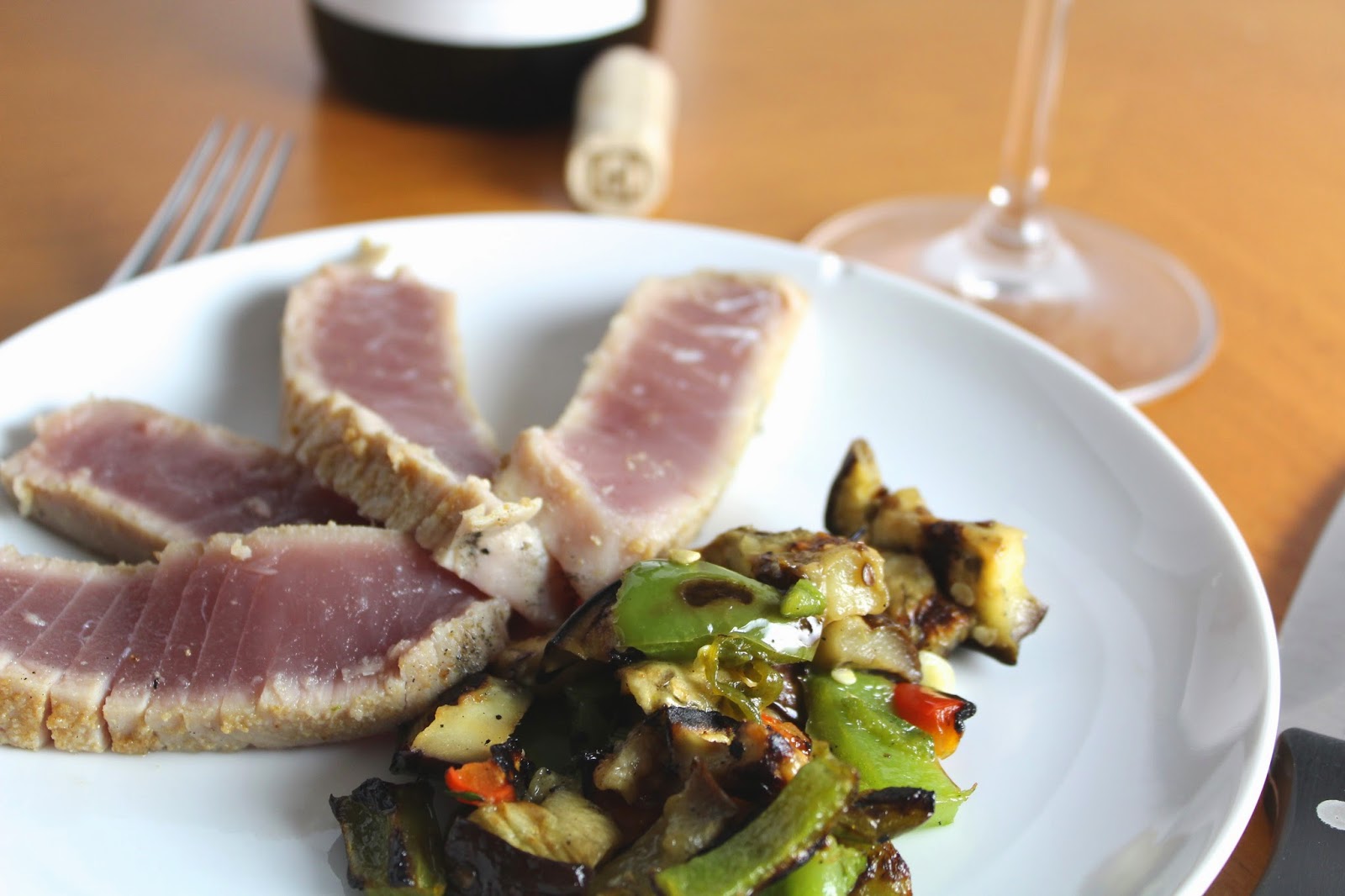 Wine Pairing: Sure, a Pinot Noir can work nicely with salmon, but a big bold Syrah for seafood? Well, the meaty tuna is very substantial, and turned out to pair well with the 2011 Halter Ranch Syrah. This wine has a big fragrance of violets and forest floor. I got blackberry jam and white pepper taste. I had my initial taste before I started grilling the tuna. By the time we settled down to eat about 10 minutes later, the Syrah had really opened nicely and was showing a lot of finesse on the long finish. This helped it make a nice harmonious pairing with the tuna--plenty of substance for this meaty fish with the spice element to work with the food. I could definitely imagine eating this flavorful pairing al fresco on a warm evening in Paso Robles! 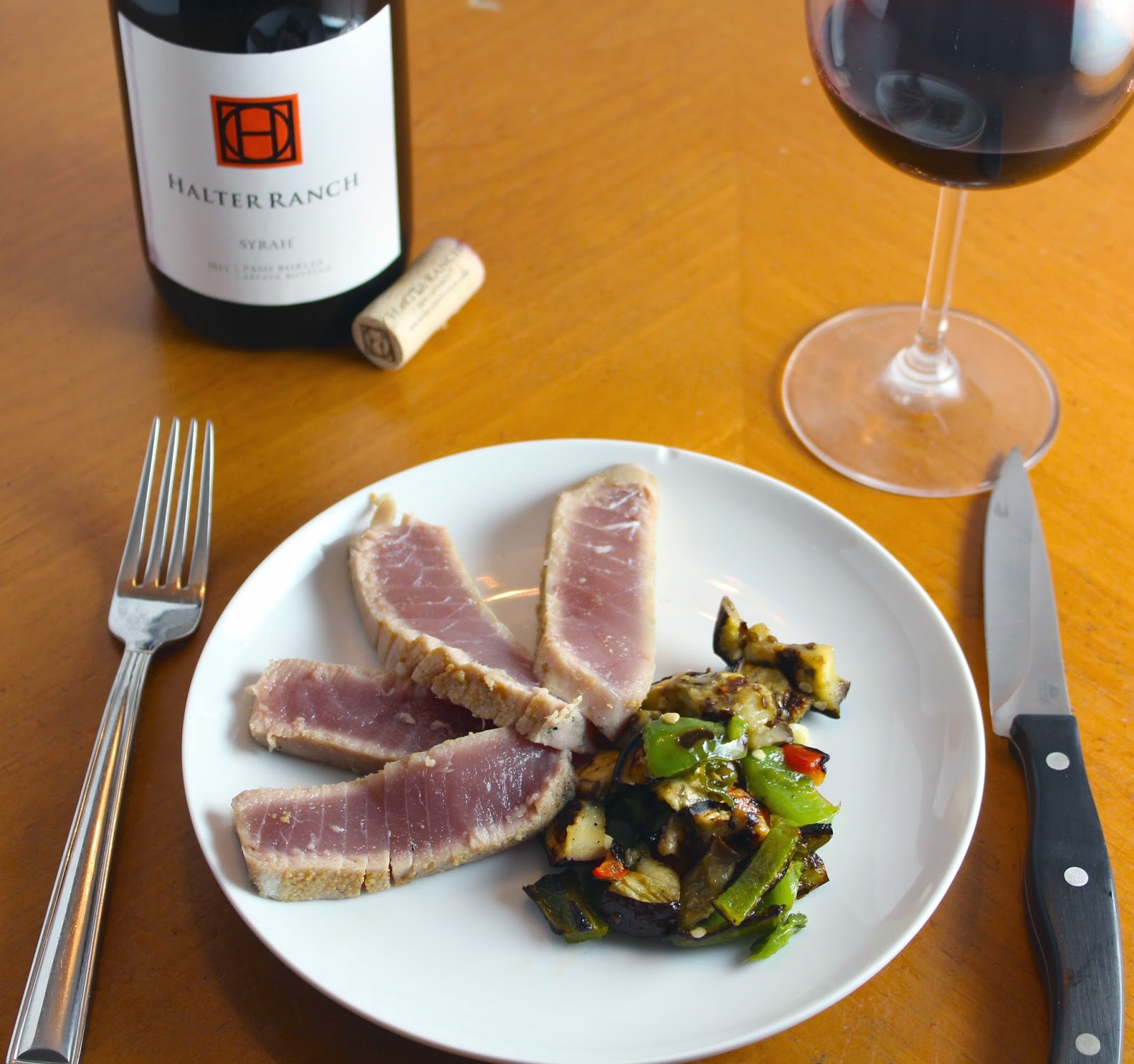 Be sure to check out these great pairings from my fellow #winePW 4 bloggers!

Join the #winePW conversation: Follow the #winePW conversation on Twitter throughout the weekend and beyond. If you're reading this early enough, you can join us for a live Twitter chat on our theme "Regional Food & Wine Pairings" on Saturday, September 13, from 11 a.m. to noon Eastern Time. Questions for the chat are posted here on the #winePW site. You can also visit our group Pinterest board to pin some great pairing ideas for later! Stay tuned for the October Wine Pairing Weekend, which will focus on "Fall Fruits and Wine Pairings" on Saturday, October 11.